Bio: Since 1991, Cornish poet, author, painter and counsellor Roselle Angwin has been leading the Fire in the Head creative and reflective writing programme, and the more recent The Wild Ways (Ground of Being) ecopsychology courses (mostly outdoors). She’s the author of 12 published books and co-author of another 2: poetry, novels and creative non-fiction.

In the 1970s, Roselle read Anglo-Saxon, Norse & Celtic with mediaeval French at Cambridge university, and her abiding interest in Celtic myth and culture, specifically the Grail legends and their predecessors in Y Mabinogi, has shaped her writing and her courses. In the 1980s she followed her degree course with a psychotherapy training in Transpersonal Psychology, based on Jungian and archetypal thinking, and the continuing relevance of myth to our life and psyches (her first book was commissioned from workshops on these themes: Riding the Dragon – myth & the inner journey, Element Books, 1994).

A lifelong countrydweller, she’s passionate about wild nature, and has a particular affinity with animals, birds, trees and healing plants; the land and other species are collaborators in her Wild Ways courses, and some of the Fire in the Head ones. Her most passionate inspiration and commitment is to help others reconnect with their inner lives, and with the rest of the natural world and other species through hands-on experience, attentiveness and creativity. Having grown much of their own vegan food for decades, Roselle and her partner are currently in transition to a permaculture and forest-garden lifestyle.

Roselle’s work is very widely published. Her essays and articles have appeared in international journals and magazines for about 40 years. She was a regular columnist and frequent feature contributor to MsLexia magazine, and has also worked as a tutor and mentor for MsLexia.

As a poet, she frequently co-creates with artists, musicians, dancers and sculptors, often on the land. Her poetry has been displayed on buses and cathedral websites, has appeared in numerous anthologies, been etched into glass, hung from trees, towed behind bicycles, printed on T-shirts, carved into stone, metal and wood, painted, sung, composed to, choreographed, danced, performed and eaten by sheep.

Her two novels are Imago and The Burning Season. She’s also the author of a number of prizewinning short stories.

Roselle’s most recent book is a full-length work of narrative non-fiction. A Spell in the Forest (published by John Hunt Moon Books in 2021) is a tribute to trees, the wildwood and tree lore (building on her ‘Tongues in Trees’ workshops). The second book, being written now, is in part a consideration of what we might learn from the legends and myths that are associated with ancient woodlands. A vegan cookbook is in completion.

She’s been the recipient of two Arts Council England awards for her own creative work (including a Year of the Artist award 2000-2001), and another two awards to support a literary festival she founded in the 1990s on Dartmoor.

As a writing tutor, Roselle has worked for the Arvon Foundation, the Open College of the Arts, The Poetry School, The Poetry Society, Oxford University and Emerson College among others; and outdoors for the National Trust, Dartmoor National Park, Natural England and many others. In 1990–1991 she was part of the Arts Council England Year of the Artist project, working at Hestercombe Gardens in Somerset, and the Cotswold Water Park (these two as part of environmental arts group genius loci) as well as at numerous academic institutions, schools and arts organisations here and abroad. Long residencies as a poet, in addition to Hestercombe and the Cotswolds Water Park, have included Sherborne Boys’ School in Dorset, and Dauntseys in Wiltshire. She has undertaken shorter residencies throughout GB and abroad. In 2017 she was writer-in-residence at Agatha Christie’s former home on the Dart in Devon, for the National Trust and Literature Works, leading many events mostly outdoors. In 2007 she was keynote speaker on The Wild for LAPIDUS.

Roselle’s passionate about the meeting points between inner and outer geographies: relationship, connection, creativity, wild places, and how these things shape our stories and, ultimately, the way we live. She has been described as ‘a poet of the bright moment… whose own sources of creative inspiration are her native Westcountry, the Scottish islands, and a highly individual blend of Celtic myth and metaphysics, archetypal psychology, shamanic and Buddhist thinking’. Her courses, retreats and mentoring take place in cyber-space, on Dartmoor and Exmoor, the Devon and Cornwall coasts, the Isle of Iona and France.

Roselle has a reputation for three things in particular: encouraging the kind of deep seeing and imagination that a poet’s eye brings to the land and other species; inspiring a passionate re-visioning of our relationship to the other-than-human; and catalysing creative exploration, soulwork and transformation through the expressive arts, commonly but not only writing.

You can read feedback on the What They Say page. 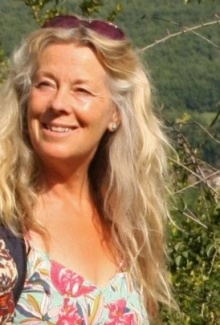 My Tweets
Follow fire in the head on WordPress.com

roselle & fire in the head

roselle & fire in the head